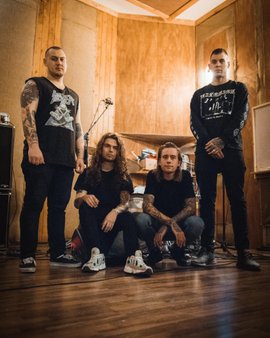 ROT AWAY is a new, effervescent hardcore band, with roots in the Copenhagen underground metal scene. With former members of Hexis, Northern Blues, Scarred By Beauty and EVRA, Rot Away have plenty of experience, despite their short lifespan.

Rot Away’s sound, lies in the buttery hole between the heavy modern metallic hardcore, and the more biting and fast thrash metal. The instrumental inspiration is taken from bands like Slayer, Metallica, Exodus, but also from bands like Brutality will Prevail, END, Expire and Turnstile etc, it results in a golden fusion of high-intensity, and dynamic songwriting.

The universe in where Rot Away is located, life is about coming to terms with one's mental illnesses, problems and diseases, but at the same time about breaking with these through anger and aggression, in order to get out on the other side.

Rot Away's live show is an aggressive energy discharge, like a fist in your face and encourages under the slogan "MAKE STAGEDIVES GREAT AGAIN" the audience to become part of the stage show and take part in their chaotic universe.

In the summer of 2020, Rot Away went in the studio to record their debut album "NOTHING IS GOOD".

The album premiered the 13´th of august 2021 and can be ordered right here:

ORDER "NOTHING IS GOOD" 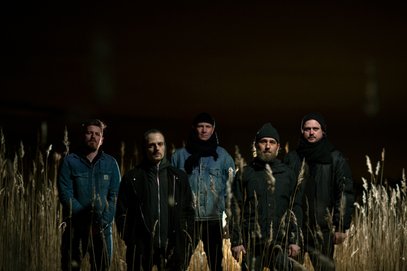 Natjager broke through the Danish sound barrier in the winter of 2017, with their first initiative Natjager. The EP was received by 6 star reviews and a booking at Roskilde festival was a reality 4 months later, as only the band's second concert ever. The rowanberries are sour said the fox and it was not only praise that was sent in the direction of the band. Their uncompromising style and use of autotune has created stir in the Danish duck pond and especially the slightly older metal audience has had a hard time handling the band and their style.

Since then, the band has released another EP, a full-length debut album, shows on SPOT, Wonderfestiwall, Copenhell as well as nominations for various GAFFA awards.

In the early 2021, the band signed a contract with Last Mile Records for a collaboration on yet another album.

Love them or hate them, Natjager is here to stay. 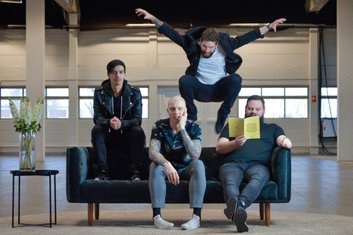 The towering level of ambition is felt in both the aggressive but melodic music, the aesthetic direction of the music videos and the headbang-inviting live concerts.

As part of the concept behind the upcoming album, Hearteater's sound is explored in a slightly untraditional way. The songs that will draw the album will be mixed by different people that the band looks up to. Both Danish and foreign producers with several well-known rock, punk and metal names behind them. Among others, Sam Guiana (Obey The Brave, Silverstein, etc.) and Chris Kreutzfeldt (Cabal, Ghost Iris, etc.). However, the songs will all be mastered by Jay Moss (Defeater, Counterparts, etc.) to maintain some kind of coherence in the soundscape.

In collaboration with Last Mile Records, Hearteater is planning to release a series of singles in 2021, which will be merged into an album in early 2022. (title TBA). The first recordings have already been made and the final tracks are expected to be recorded in the fall of 2021. 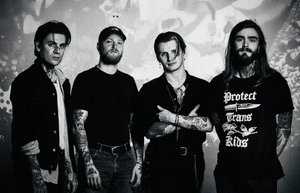 parallels to The Cure’s “Disintegration”-era, understood and conveyed into a newly interpreted and up-to-date context. The major-scale tones and airtight production (Chris Kreutzfeldt — Møl/Cabal/Siamese), will besides that create associations to pompous stadion rock-band like The 1975 and Bring Me The Horizon. As yet another spice in the musical cocktail, VIOLENCE will add a dash of wildness and carelessness often found in the punk genre. Punk have had enourmous importance for the band — that with more than one hundred european concerts, (including sold-out danish concerts; VEGA, Pumpehuset etc.) — would categorize themselves as experienced in the underground music environment without blinking. The members were known as the hardcore punk band WOES back then — a band that has since been shelved in search for a sound which resonates more with the visions of the members. 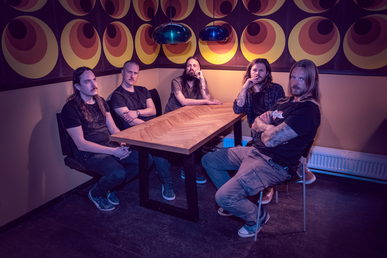 The eyes are closed, the skin is cold. The rotten smell of decay fills the air. The wind whips and the only sounds are the creaks of the naked bare branches. Everything seems dead and deserted. But suddenly the eyes open and a dead 1000 yard stare gazes beyond the endless desolation. The crack to the world of the dead is yet again open.

Kadavermarch is a reality, the eyes of the dead stare directly into the world of the living. The strange world of the dead, that seems both present and distant, meaningful and empty, your friend as well as your enemy and enchanted and seductive as a deadly lover. Embrace the dead and allow yourself to be drawn into the mud on this first single "1000 Yard Stare" from Kadavermarch, Copenhagen, out the 26´th of November 2021. Full debut album "INTO OBLIVION" is scheduled to drop in August 2022.